The secrecy surrounding just what company was moving to the west Stanislaus County community just off Interstate 5 had many throughout the region speculating. After all, a company big and stable enough to bring in 1,500 full-time jobs and another 1,000 or more seasonal jobs for a “fulfillment” center truly would be a godsend for a county with an unemployment rate of 16.1 percent for December.

Many of the rumors claimed it was e-commerce giant Amazon.com. Still other rumors claimed either Target or J.C. Penney was bringing in a distribution center.

Patterson in recent years has become a logistics hub, according to the “Transportation and Logistics Industry Cluster Report” by the Stanislaus Economic Development and Workforce Alliance, because of available land, access to Interstate 5 and railroad lines, proximity to the Bay Area, and competitive wages and electricity costs. CVS, Kohl’s, W.W. Grainger, and others have distribution centers in Patterson. 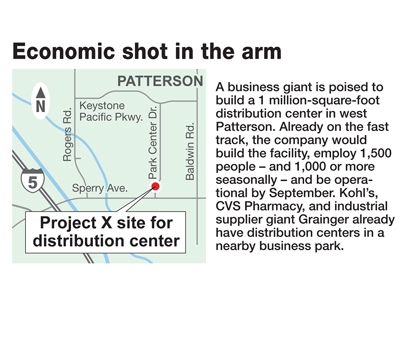 Patterson City Council members were to be briefed about the incoming business on Jan. 11, but the meeting was abruptly postponed, supposedly so that the parties involved in the deal could iron out details and escrow could close before going public.

“Seefried, as the representative for the investors that will be the property owners, is close to closing escrow on the property and starting construction on the Project X site,” Patterson City Manager Rod Butler wrote in an agenda report for that special meeting. He was referring to Atlanta-based Seefried Industrial Properties, which specializes in development, leasing, and property management of industrial real estate and has developed distribution sites for Amazon.com in the past. Seefried contacted the city over the summer about two parcels in the Westridge Business Park, wrote Butler.

State legislation signed in September adds fuel to the Amazon.com rumor since it received concessions on earlier state legislation that would force retailers such as Amazon.com to collect sales tax. Amazon.com and other retailers were given more time before they had to collect the sales tax by pledging to create jobs. For Amazon.com, that meant pledging to create at least 10,000 full-time jobs and hire 25,000 seasonal employees by the end of 2015. It also dropped a referendum bid to overturn the earlier legislation.

“A prolonged, costly ballot battle is a benefit to no one,” Gov. Jerry Brown said in signing the bill “This landmark legislation not only levels the playing field between online retailers and California’s brick-and-mortar businesses, it will also create tens of thousands of jobs and inject hundreds of millions of dollars back into critical services like education and public safety in future years. It’s time for Washington to follow our lead and forge a bipartisan national solution.”

The state Board of Equalization has estimated that California loses more than $1 billion annually from uncollected use taxes. The analysis also shows that the state loses at least $83 million each year in uncollected state and local use tax attributed to Amazon’s sales in California.

Amazon.com’s net sales increased by 35 percent in the fourth quarter ending Dec. 31 to more than $17.4 billion compared to nearly $13 billion for the fourth quarter of 2010, according to the giant’s end-of-quarter report released Tuesday (Jan. 31).

Contact the author about this and other stories at kmichaud@cvbizjournal.com.